These fat bike models are primed for adventure. Whether you like to ride groomed trails in the winter or you like to ride loose terrain, these massive tires will help you float over obstacles and improve your traction. 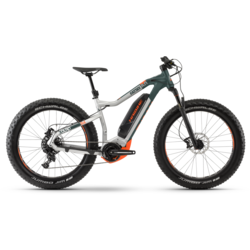 Haibike XDURO FatSix 8.0 - 2020
$4,199.99
The XDURO FatSix 8.0 is a real traction monster that shows its true nature in snow, mud, and sand. Its 4" tires ensure optimum grip to master even the most difficult terrain while putting a broad grin on your face. High quality components, such as the 11-speed SRAM NX gear combination and RockShox Bluto suspension fork combine with the powerful Yamaha PW-SE motor to take you places you never thought you'd pedal. 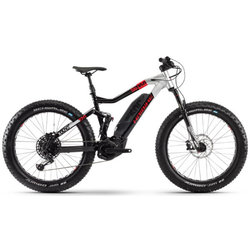 Haibike XDURO FullFatSix 10.0 - 2020
$5,799.99
The Haibike XDURO FullFatSix 10.0 is as formidable as its name, combining e-bike technology with dual suspension and giant fat tires. With this model, Haibike has created an off-roading monster that eats up anything in its path. It's the perfect companion for riders who want the ability to go anywhere and have a blast doing it. RockShox suspension plays a key roel in this build, benefiting from a Bluto RL 100mm fork and a 47.5mm Deluxe Select Air shock. Add all that travel to the already massive Schwalbe Jumbo Jim Evo, 26" x 4" tires and you get a bike that floats over every obstacle and provides a comfortable, capable ride wherever you take it. The FullFatSix 10.0 has enough gear range for the steepest climbs thanks to the 1x12 SRAM GX Eagle drivetrain and 11-50 tooth cassette. And when you reach the top of the mountain and point this beast downhill, you can be confident that the e-bike proven TRP-29 disc brakes will give you all the control you need to smoothly navigate down. As for the motor, the FullFatSix 10.0 features a Yamaha PW-X2 250 W drive system that puts out 80 Nm of torque and provides assisted speeds up to 20mph. The 500wh lithium ion Yamaha battery charges quickly and provides plenty of juice for ambitious rides. A simple display system lets you switch between levels of assist with ease so you can keep your focus on the trail ahead. 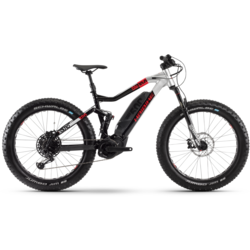 Haibike XDURO FullFatSix 10.0 - 2020
$5,799.99 - $5,800.00
The SUV among off-road bikes: The XDURO FullFatSix 10.0 is a monster truck with full suspension that doesn't compromise on comfort or safety. Its 4-inch tires, 120mm travel, and powerful disc brakes give you maximum traction and safety on any surface – and put a broad grin on your face at the same time. 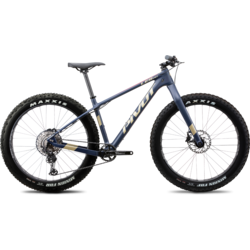 Pivot Cycles LES Fat Pro XT w/Pivot Rigid Fork - 2021
$4,199.00
Pivot fat bikes are for all season and all surface cycling. Ride where others can't and embrace old man winter with oversized fat tires to enhance traction, floatation, and bump absorption. From Singletrack to Snow—One Bike Rules It All The Pivot LES Fat is the world's most versatile big-tire machine. Compatible with almost every wheel size available, from 26" and 27.5" Fat to 27.5+ to 29er, the LES Fat is a four-season hardtail that can take you from singletrack to snow to sand with no compromises. 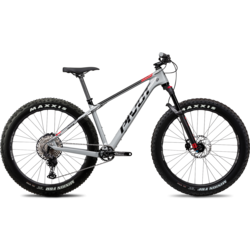 Pivot Cycles LES Fat Pro XT w/Manitou Suspension Fork - 2021
$4,450.00
Pivot fat bikes are for all season and all surface cycling. Ride where others can't and embrace old man winter with oversized fat tires to enhance traction, floatation, and bump absorption. From Singletrack to Snow—One Bike Rules It All The Pivot LES Fat is the world's most versatile big-tire machine. Compatible with almost every wheel size available, from 26" and 27.5" Fat to 27.5+ to 29er, the LES Fat is a four-season hardtail that can take you from singletrack to snow to sand with no compromises.

Surly Big Fat Dummy - 2019
$3,175.00
The Big Fat Dummy is a long tail cargo bike that took a few too many doses of growth hormones. At first glance, you might say that Surly just put bigger tires on a Big Dummy. But if you said that, you'd actually be very wrong so just… don't. Think of Big Fat Dummy as more of a second or third cousin to Big Dummy rather than a brother. They share some of the same DNA and look sort of similar, but they're two very different bikes and really only interact when they both reach for the potato salad spoon at that family reunion that no one really wants to be at anyway. Now that that's out of the way, let's get down to the nitty gritty of what makes this hulking beast of a bike tick. Surly's goal with designing a cargo bike around fat tires was to create the most stable, stiff, and traction-laden ride possible while hauling a ton of stuff. Big Fat Dummy has a longer toptube and slacker headtube than its more svelt cousin giving it a nice, predictable, and stable ride. They also used thinner, lighter tubing to construct its cargo area so while it's an overall burlier bike, there's not much difference in weight. Big Fat Dummy accepts either 10mm or 12mm axles in the rear with a spacing of 190/197mm. That big ol' spacing equates to one thing: tire clearance for days. Big Fat Dummy maxes out at a massive 26 x 5.25" tire.* While that large of a tire provides the most traction and stability a bike can possibly offer, it's also a lot of rubber to push and might not be for everybody. Luckily, Big Fat Dummy is also a blast to ride with 3" tires too. It uses the same 100mm suspension-corrected fork as the Wednesday, meaning if you want to add a little squishy squishy to your ride, you can throw a Bluto on and let ‘er rip. If you intend to carry a passenger on your Big Fat Dummy, Surly requires use of their Dummy Rail Collars. These provide a secondary retention system for the rack, as well as stiffen the rack system. In addition, a stoker handlebar set up, found on tandem bicycles, is recommended as well. Make sure to check with seat post manufacturer for stoker handlebar compatibility. All Big Fat Dummy framesets and bikes ship with a Dummy deck, rails, bags, and the aforementioned Dummy Rail Collars so you can immediately start hauling cargo — human or otherwise. Big Fat Dummy is ready and willing to carry all sorts of crap — literally. It's already in use on an organic farm in Ecuador so it's likely that it's hauled some form of manure by now. *Using a 26 x 5.25" tire will cause some drivetrain limitations.
Page 1 of 1